hat's off to riri 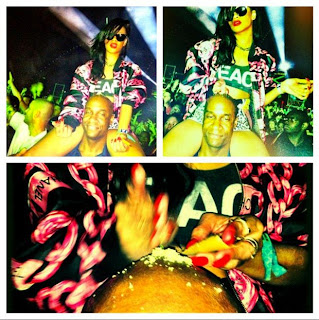 Thank you dlisted for sharing this story with me.

I've always had mixed feelings about rihanna.  I usually really like her songs when I first hear them, then as they are played to death I start to hate them, then like two years later I can listen to them again.  I have never really followed her private life beyond the biggest stories that became mainstream news.

But this, this I like.  I mean, who does this?!  Fantastic.  I don't really care about the fact that she's rolling a joint, it's not the first time she's been photographed with weed, and she definitely seems aware that her picture is being taken.  It's that she's both sitting on her bodyguards shoulders and using his head as a table.  And the look on his face.

How is there any question about rihanna playing whitney in a movie?  If that isn't the poster for a remake of the bodyguard I don't know what is.

Posted by Detective Oliver Benson at 8:41 AM