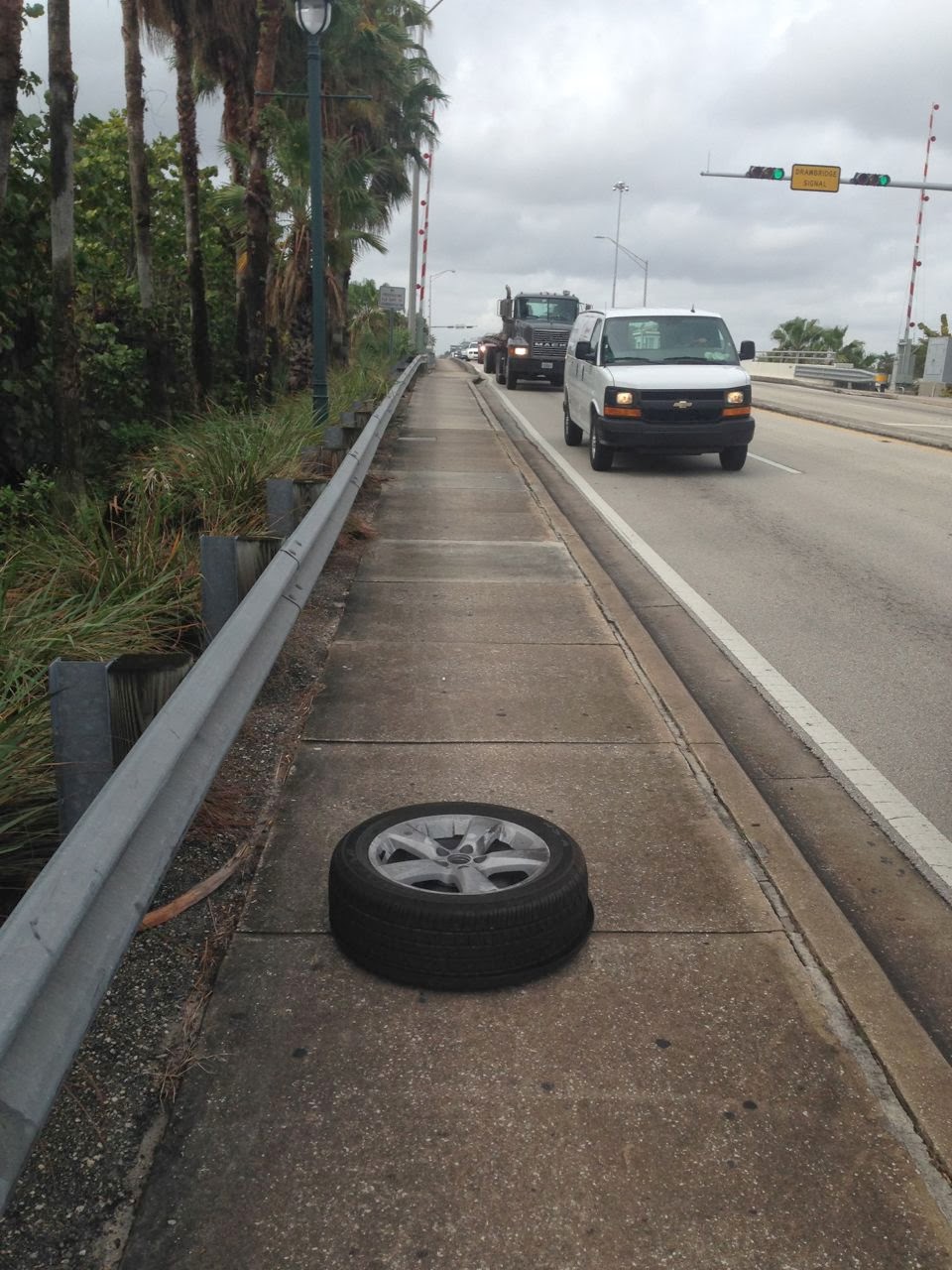 Nobody seemed concerned, there were no three wheeled vehicles down the road with their hazards on.
I mean, even if it was the spare tire on the back don't you think you would hear something or feel something when it fell off?  I just don't understand.
Posted by Detective Oliver Benson at 10:03 AM No comments: 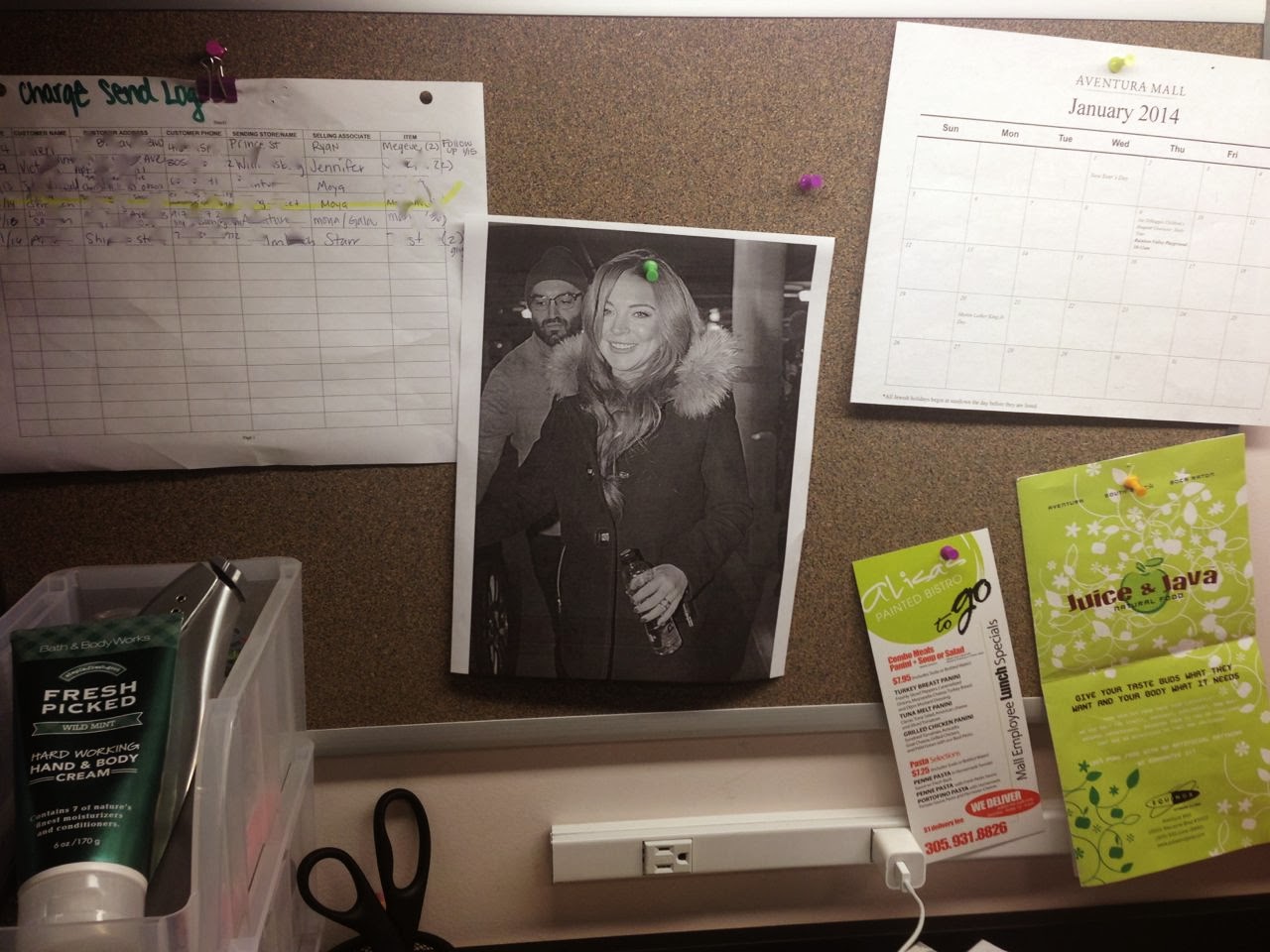 At work they send us emails with excerpts  from different magazines that used our brand or mentioned it or whatever.  They also send pictures of celebrities wearing our stuff and Starr always prints out the ones she likes.

I knew from the last time this happened that Lindsay wearing our clothes would not merit the kind of ballyhoo it so rightly deserves so I took the initiative when I came across that picture to send it to Starr for her to print out.

I expected some backlash from my jealous coworkers (GALA) but nothing as horrible as the defacing that happened. 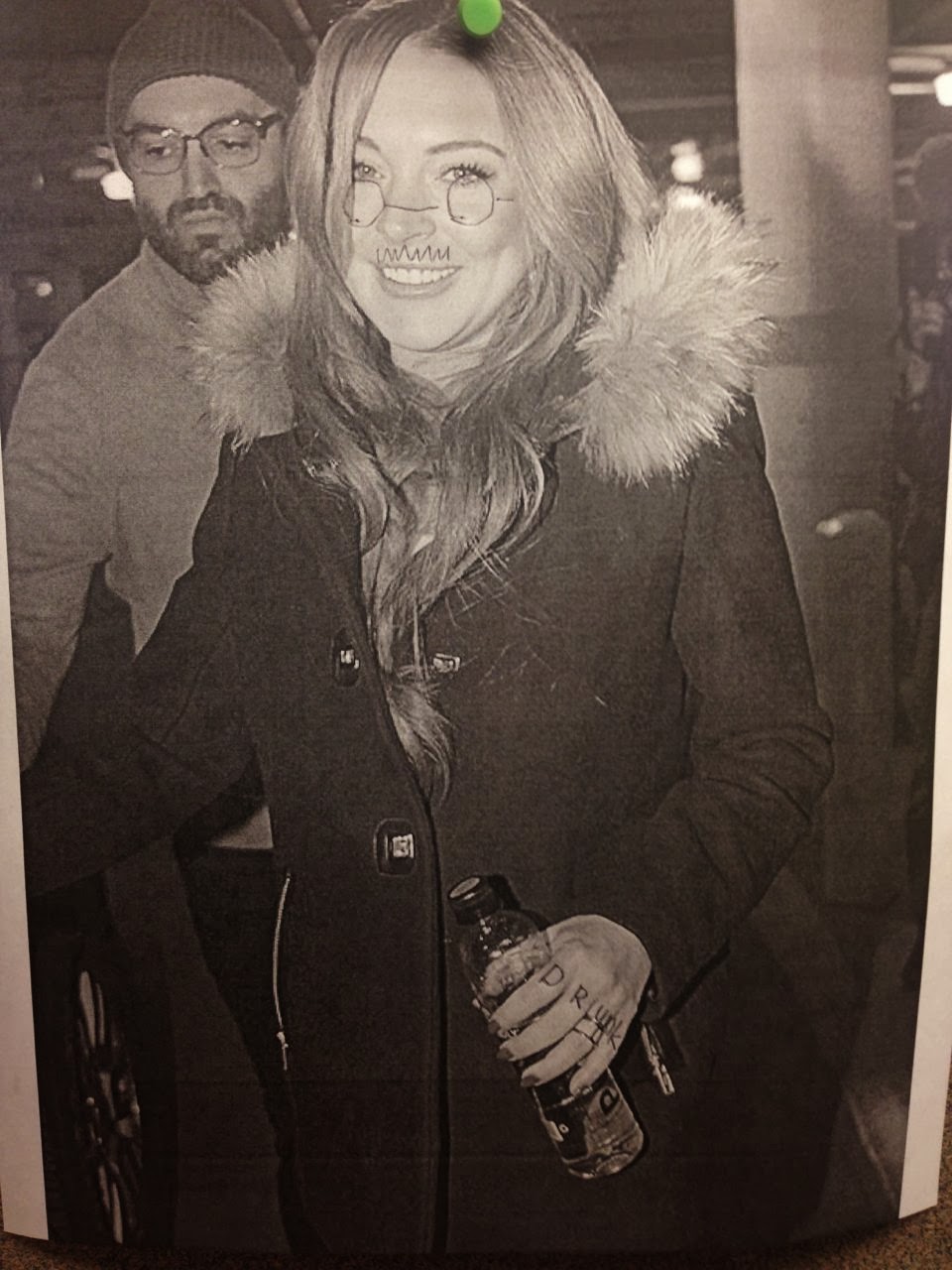 This is why Noriko should not be allowed in our stockroom.

Haha I do love the knuckle tattoos though: 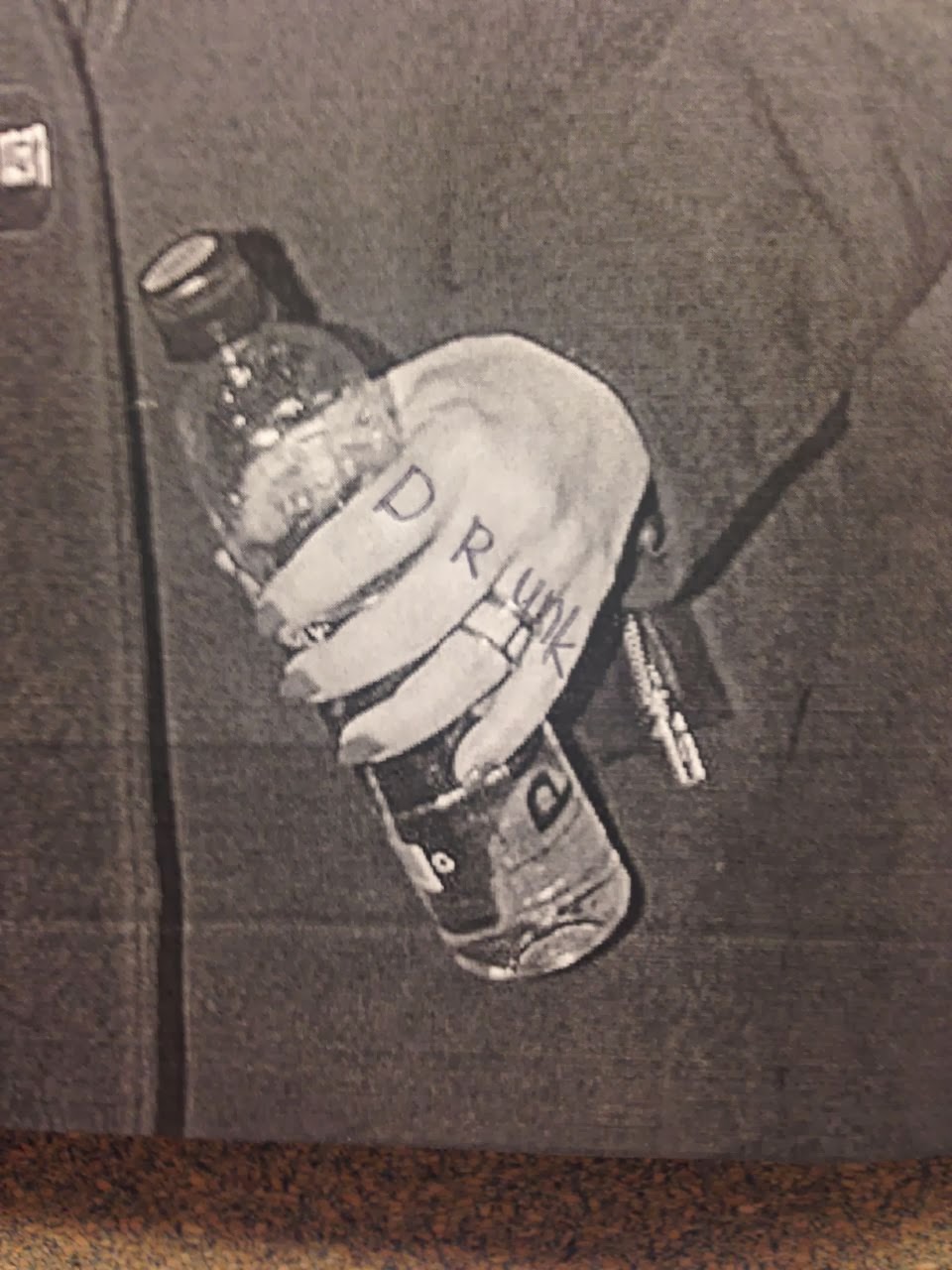 I kind of want to get that.
Posted by Detective Oliver Benson at 8:19 PM No comments:

this is what goes bump in the night 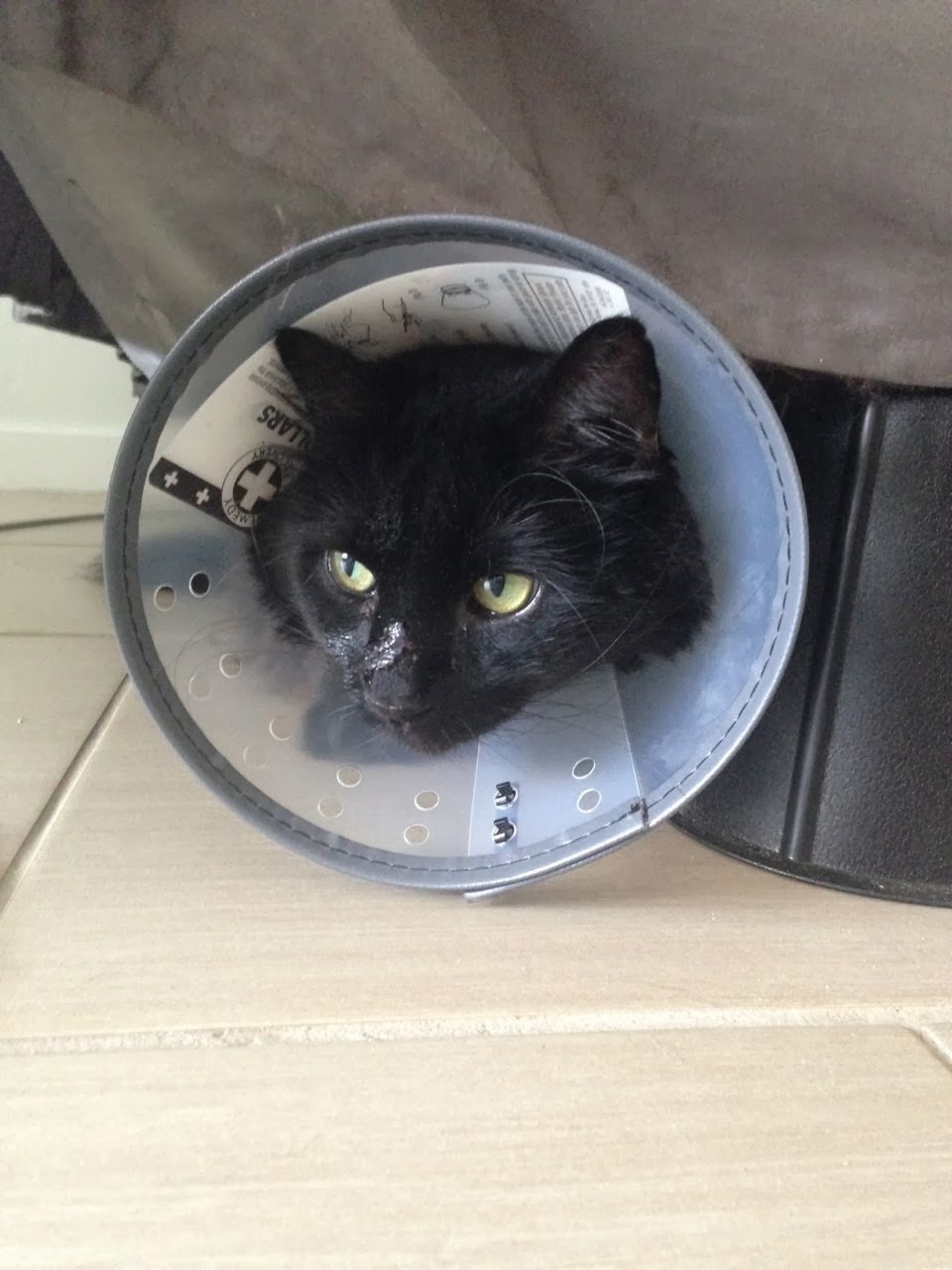 I had a meeting at work to go to Sunday morning so I decided to just stay in Saturday night and get to sleep at a reasonable time.  I was awoken several times to a crashing noise at the window so loud I thought somebody was breaking in to my apt.  Once up and awake I realized it was the detective attacking another cat through the window.

I managed to scare the other cat away, the detective and I had a few words, and then I went back to bed.  It wasn't until I was walking out the door yesterday morning that I noticed a few drops of blood on the floor.  It wasn't that much and a cursory glance at the detective from across the room didn't reveal much.  I figured whatever it was could wait until I got back from my meeting.

I felt kind of bad later when I could properly inspect him and discovered that he had gashed his face open, presumably on the blinds.  I referred to the expertise of Gala and Daniel, as well as a panel of strangers at PetCo and opted for tending to his wounds myself. 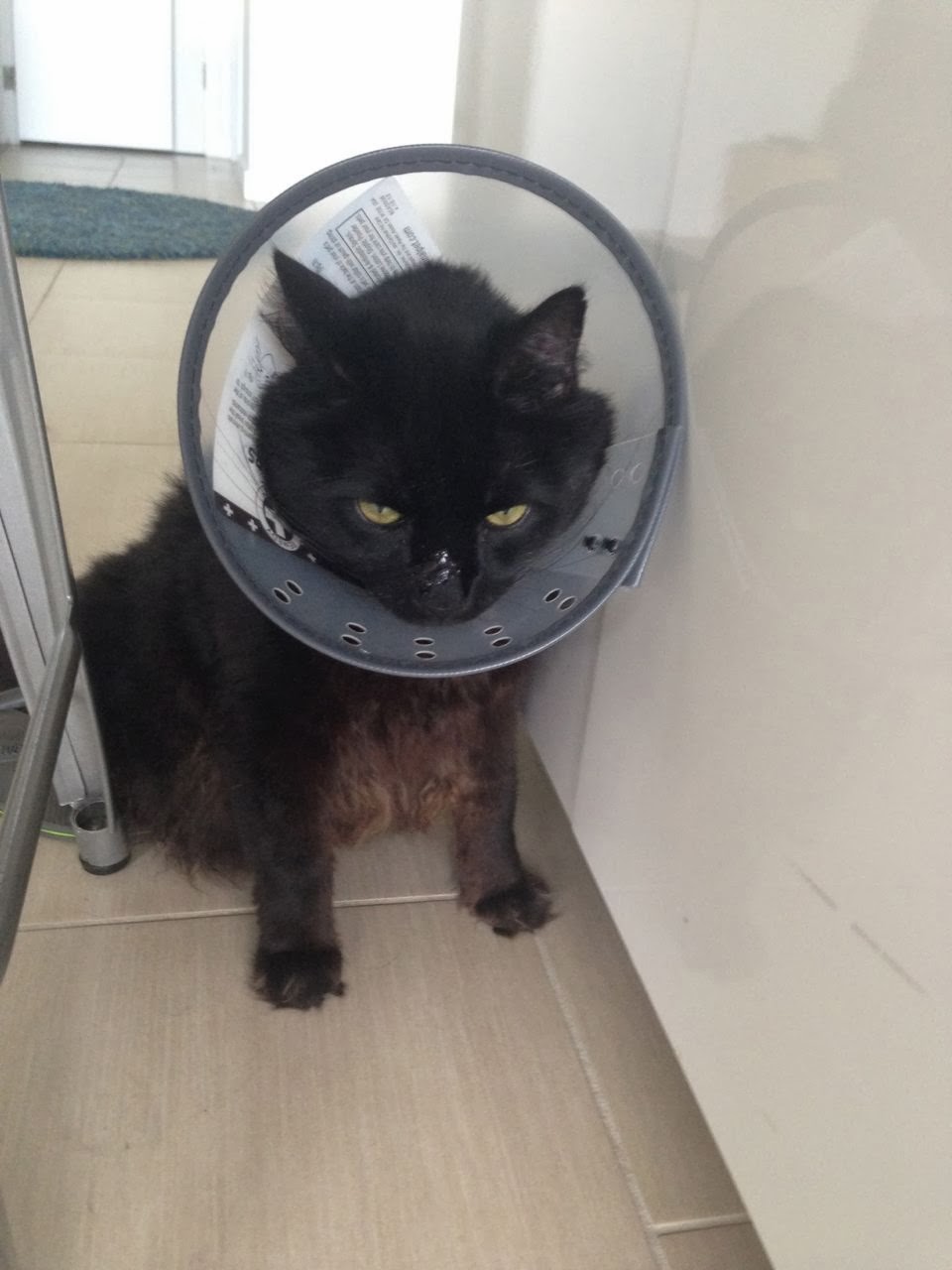 As you can imagine our relationship reached a new level as I pinned him down, wrapped in a towel like a burrito, and disinfected his nose with hydrogen peroxide.  The first round he didn't really do anything, but it only took once for him to learn.  The following times were more of a challenge.

And the cone!  He actually kind of seems to like it when he gets used to it.  I think it makes him feel dramatic.  But then when he gets too comfortable he forgets he's wearing it and gets shocked when he remembers.  He tries to wiggle out of it backwards for a little bit before surrendering again and just laying down. 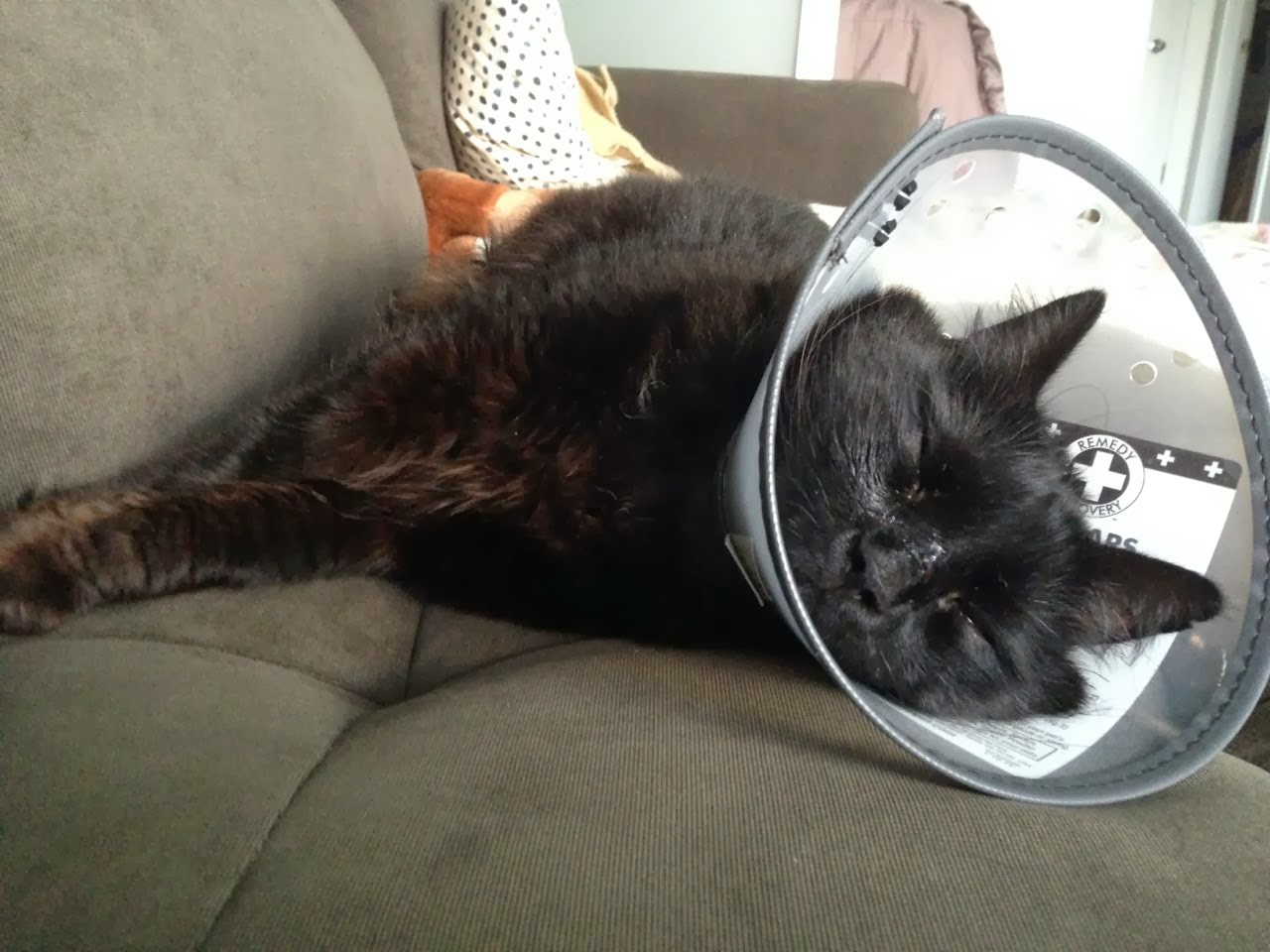 The good news is that his nose is a lot better this morning.  I even took his cone off for some supervised time this morning but it might go back on when I leave for work.  The first thing he did when I took the cone off was go over and eat.  After that he walked right back to where his cone was sitting on the floor, sniffed at it, and then sat down next to it like he already missed it.

weirdo.
Posted by Detective Oliver Benson at 8:07 AM No comments:

how to break into a 2004 Ford Ranger at Aventura Mall

I blame my pants for locking my keys in the car. See the problem is that they are too tight so I can't put much in the pockets, thus I left my keys on the seat and didn't realize until after I'd locked and shut the door.

Thankfully Elliot and Mike were there to save the day. 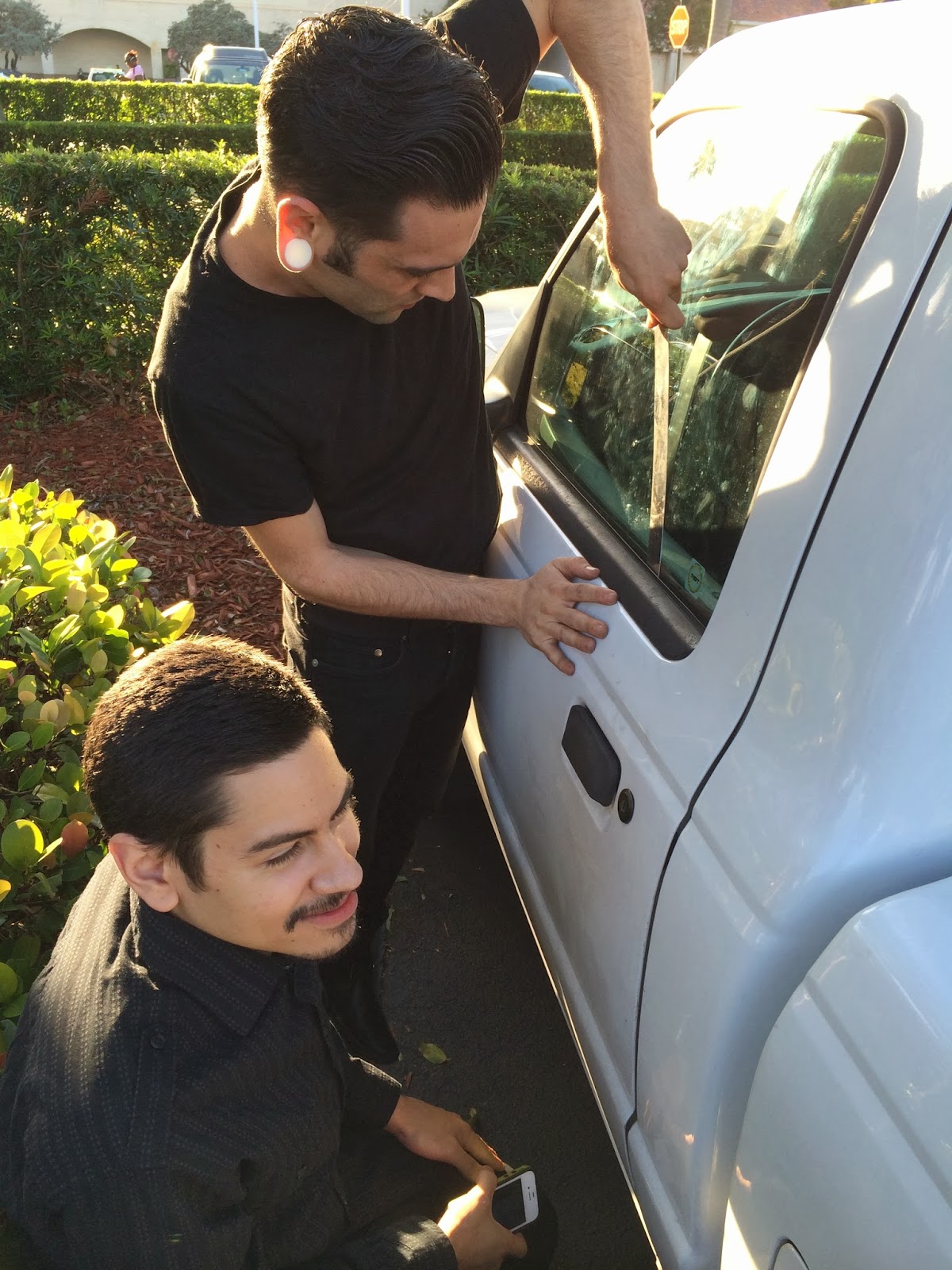 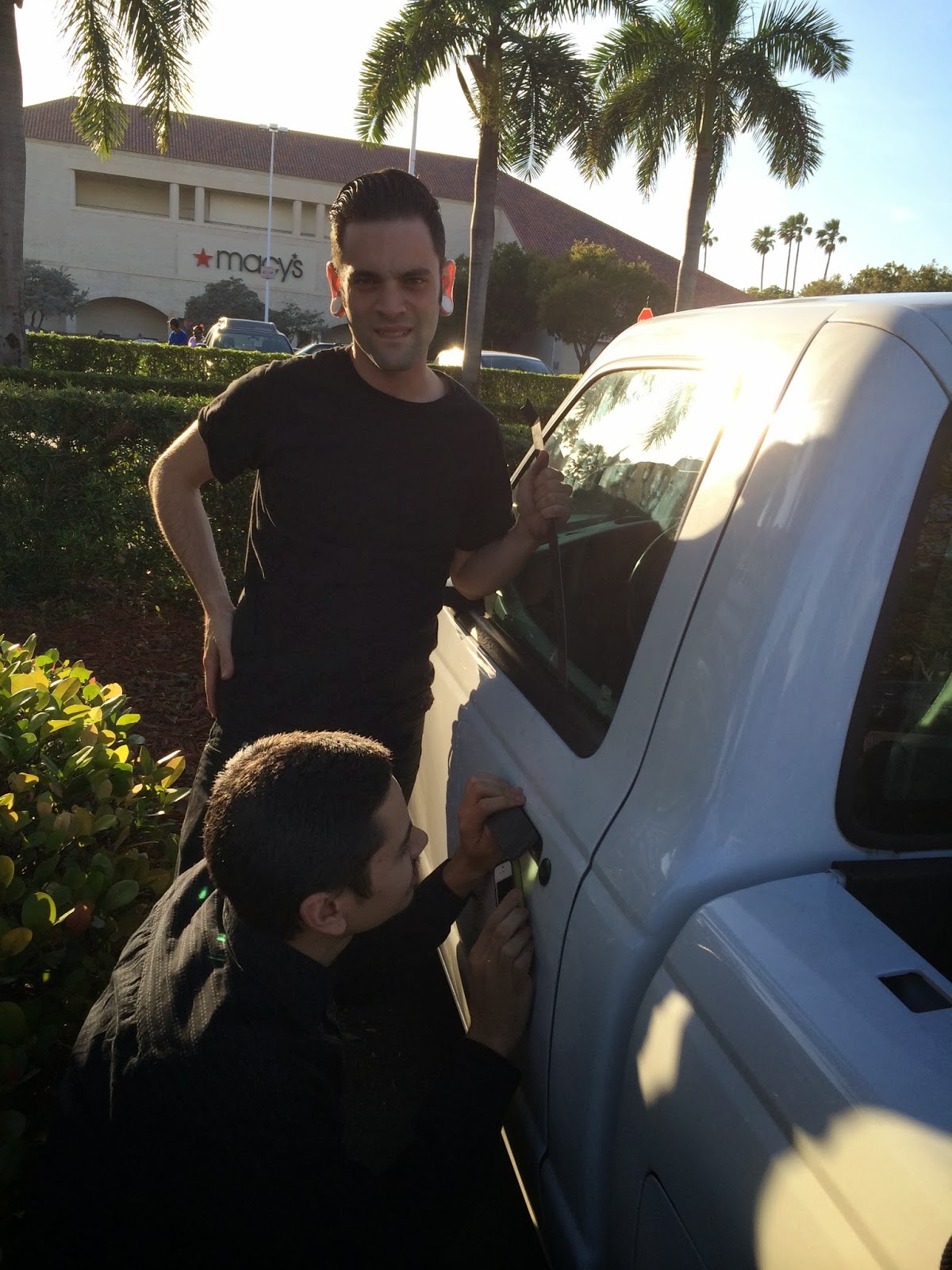 They worked tirelessly until their mission was accomplished. 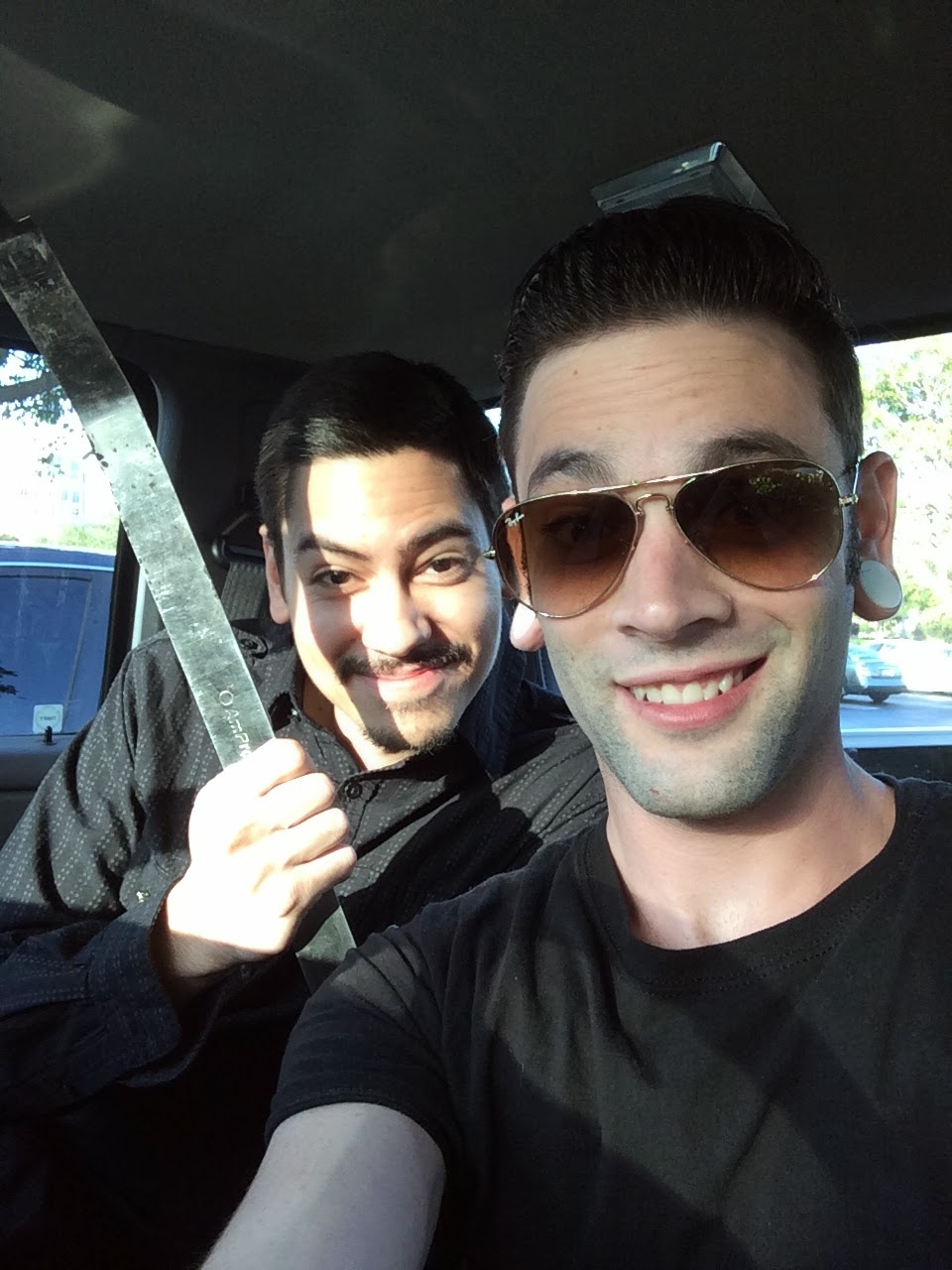 The video they made was as a response to the available "how to break in to a ford ranger" videos, which mostly sucked.  I like theirs a lot better.  And it's already come in handy! 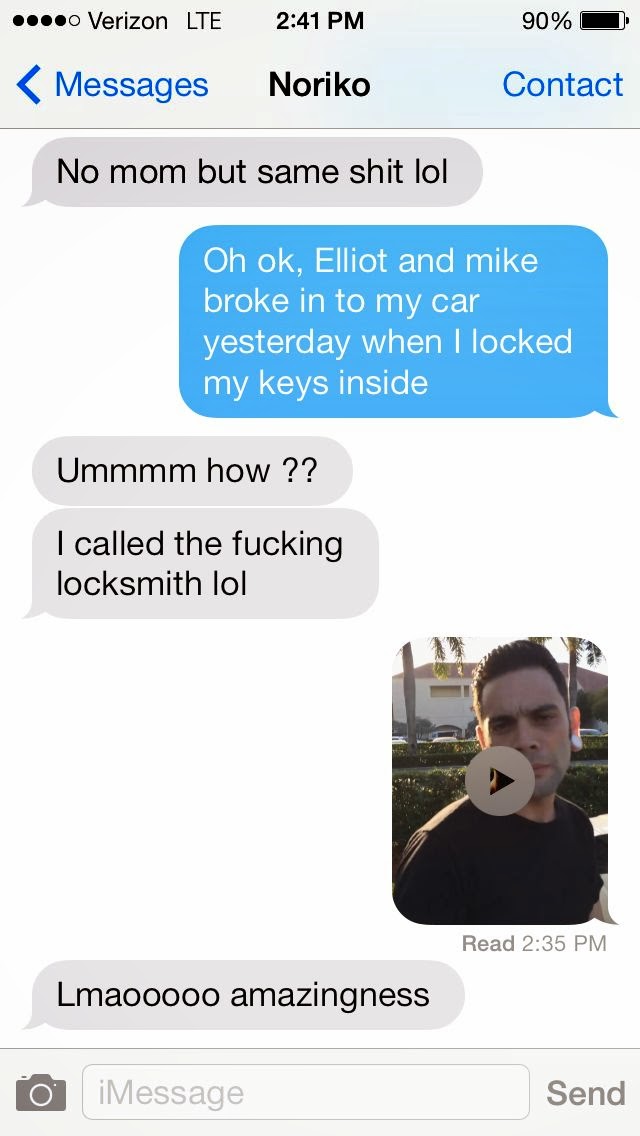 After Elliot showed me the video he said, "Oh and we left you a surprise in your truck". 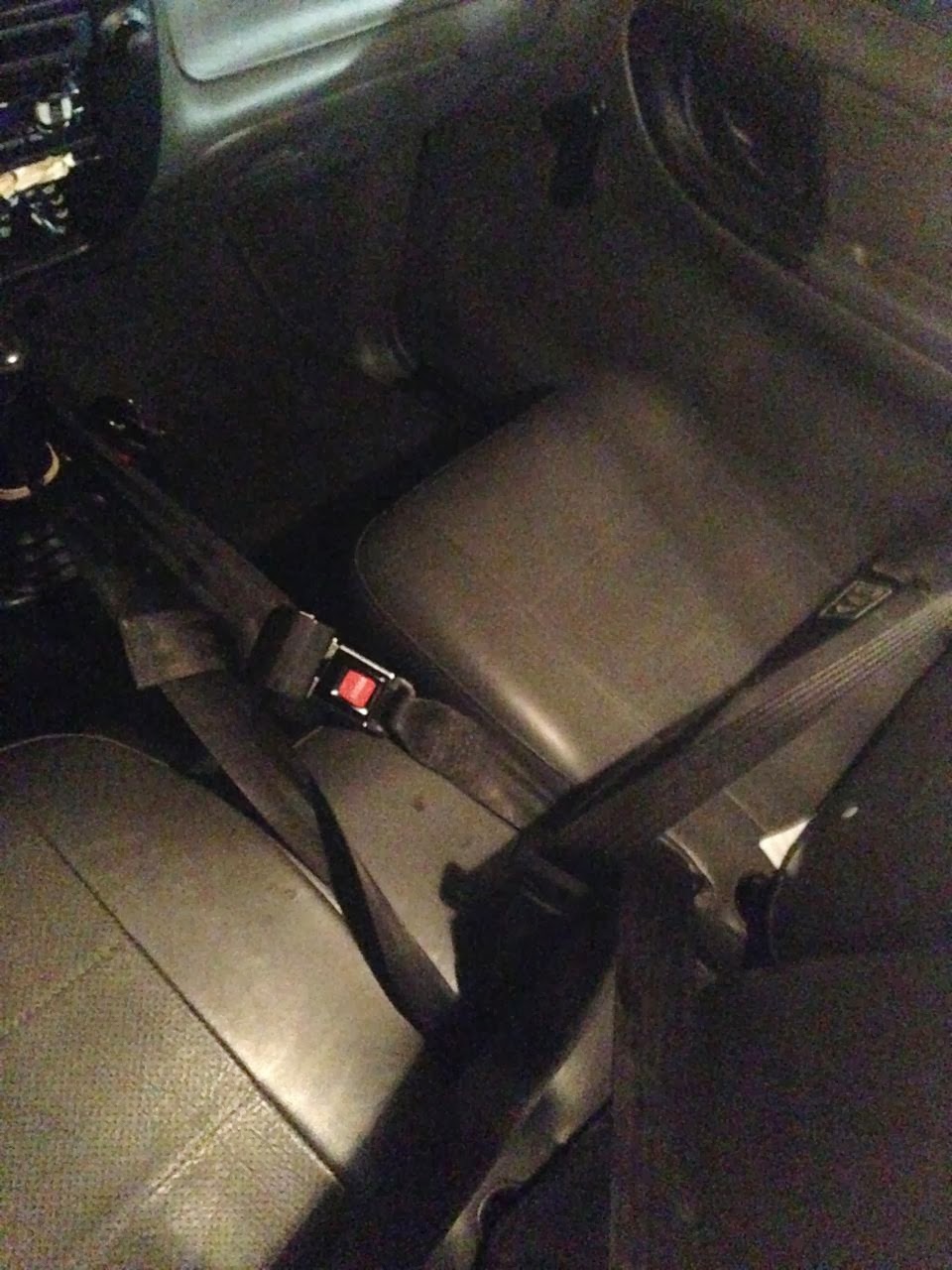 Posted by Detective Oliver Benson at 4:03 PM No comments:

how do you explain this? 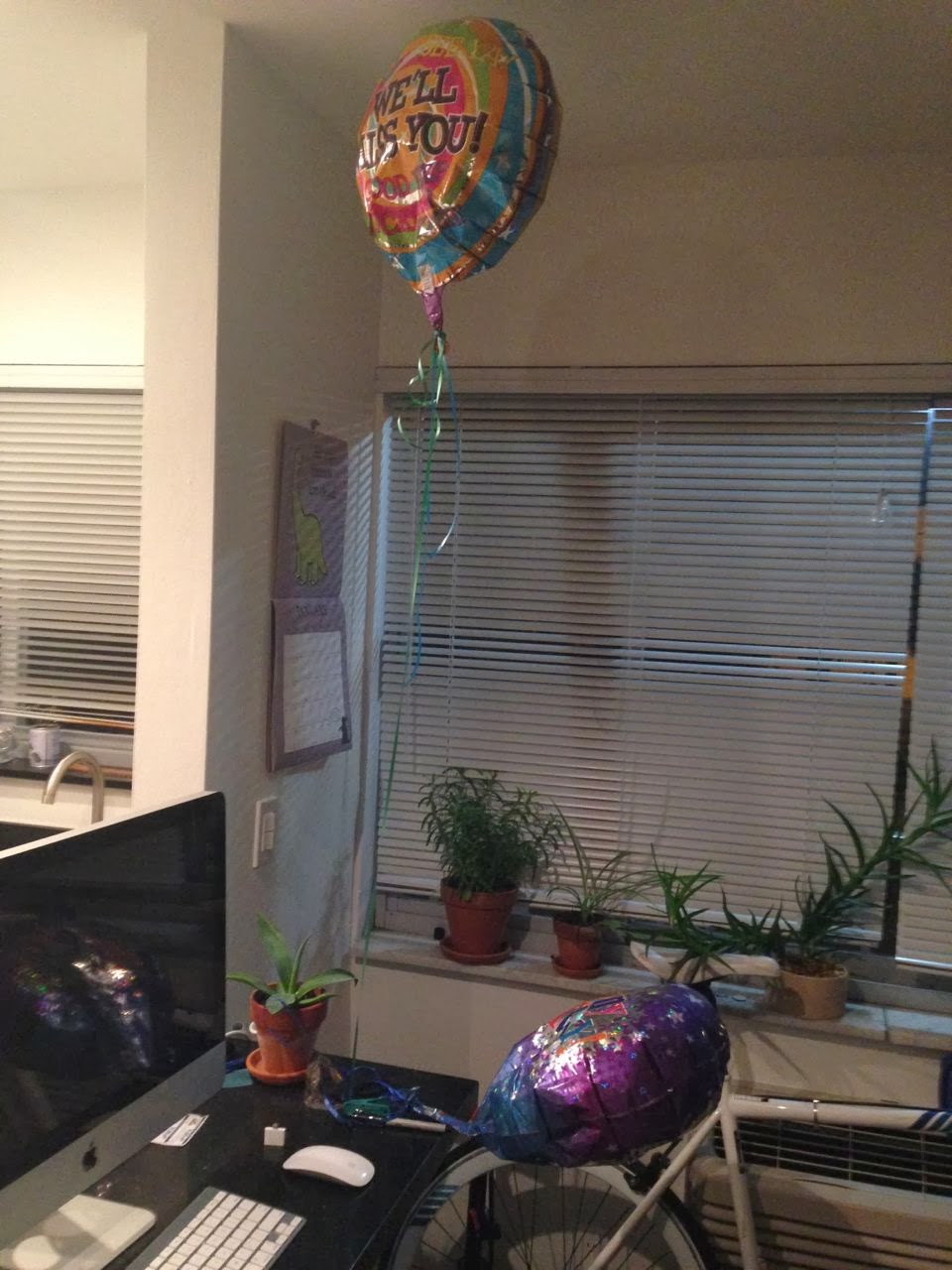 The balloon that is still aloft is my "we'll miss you" balloon that the girls in Boca got me on my last day back in NOVEMBER.  The sad balloon barely clinging to life is my "happy birthday" balloon I received at the beginning of this month from Gala.

What kind of sorcery was used on my going away balloon that it is still as perky as the day it was inflated?  I'm determined to keep it until it dies a natural death but now having another balloon come and go in the meantime makes me realize it's a little ridiculous to still have my going away balloon when I'm about to start the 3rd month of my new job.

Maybe I should take bets for how long it will end up lasting.
Posted by Detective Oliver Benson at 7:30 PM No comments: 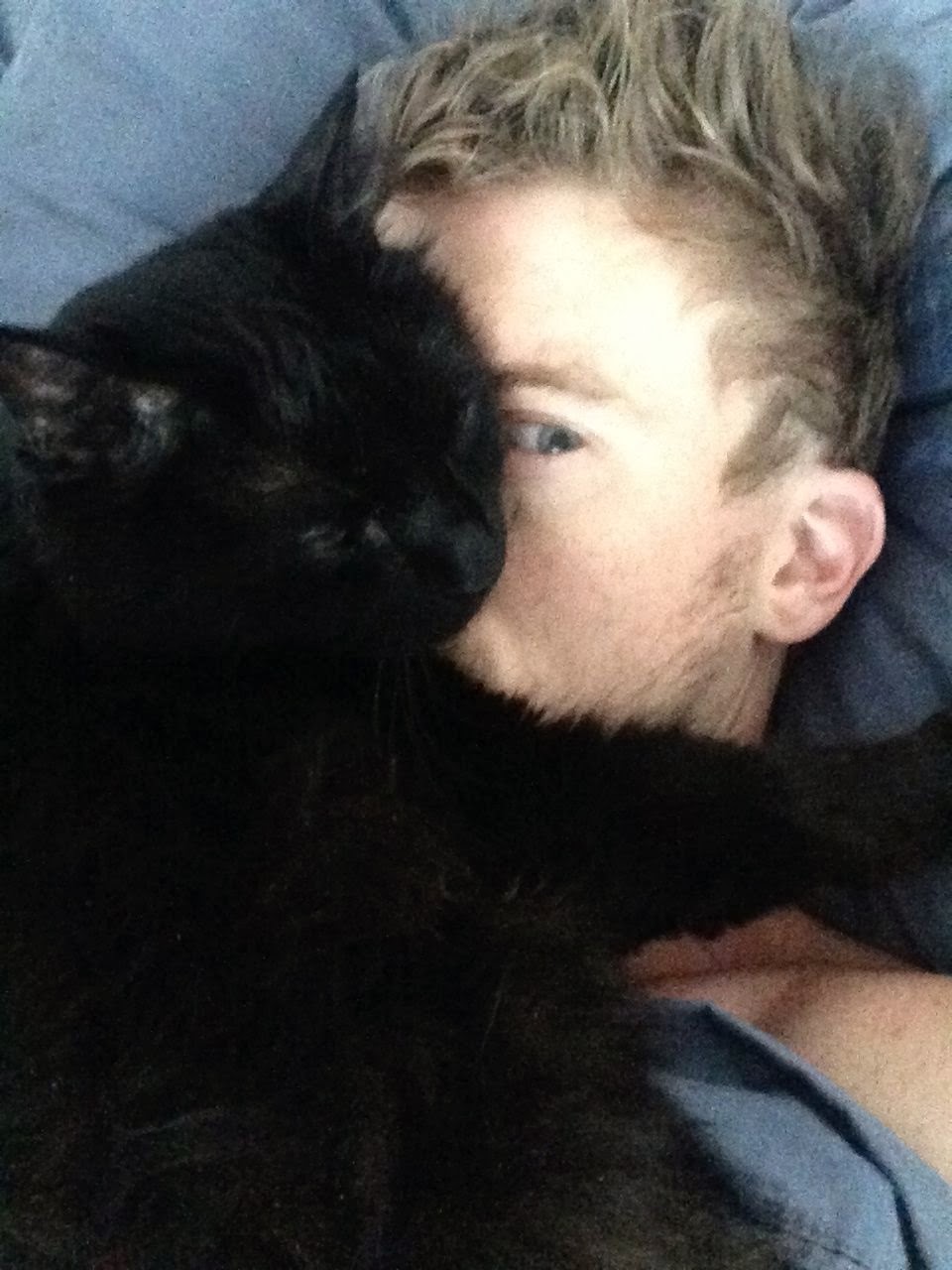 He's like, "I don't know if you noticed me or not but I'm here for cuddles".

The cold weather has made him particularly affectionate lately.  It's been a challenge to drag myself out of bed for work each morning. 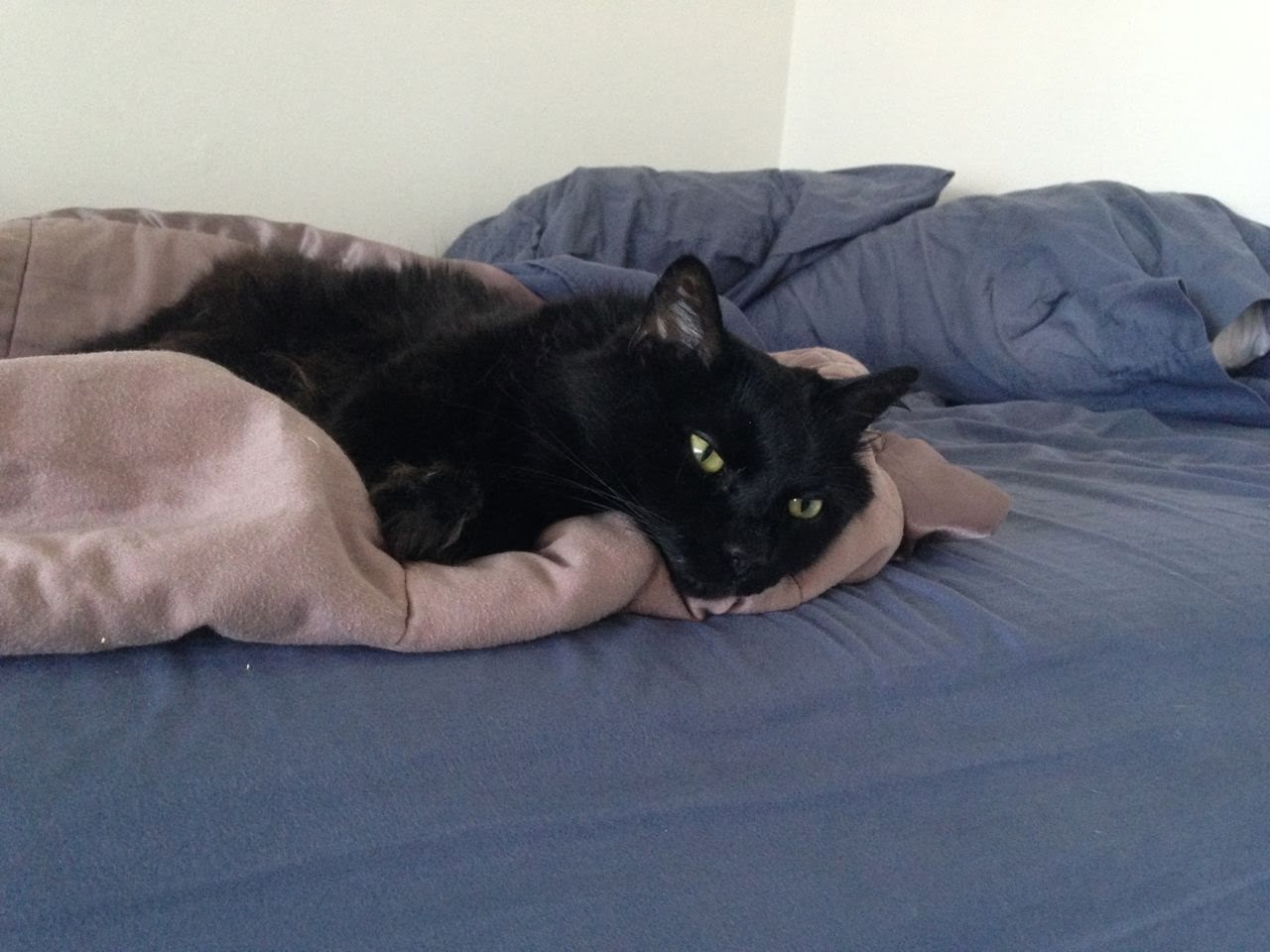 Posted by Detective Oliver Benson at 5:16 PM No comments: 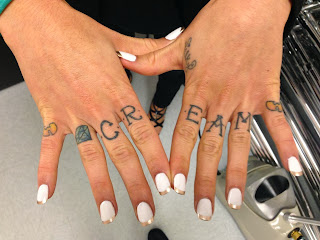 I'm obsessed.  I had never considered such a thing as gold tips, it looks so fancy.

Kim, you need to get on this action.
Posted by Detective Oliver Benson at 8:52 AM No comments:

does this make sense? 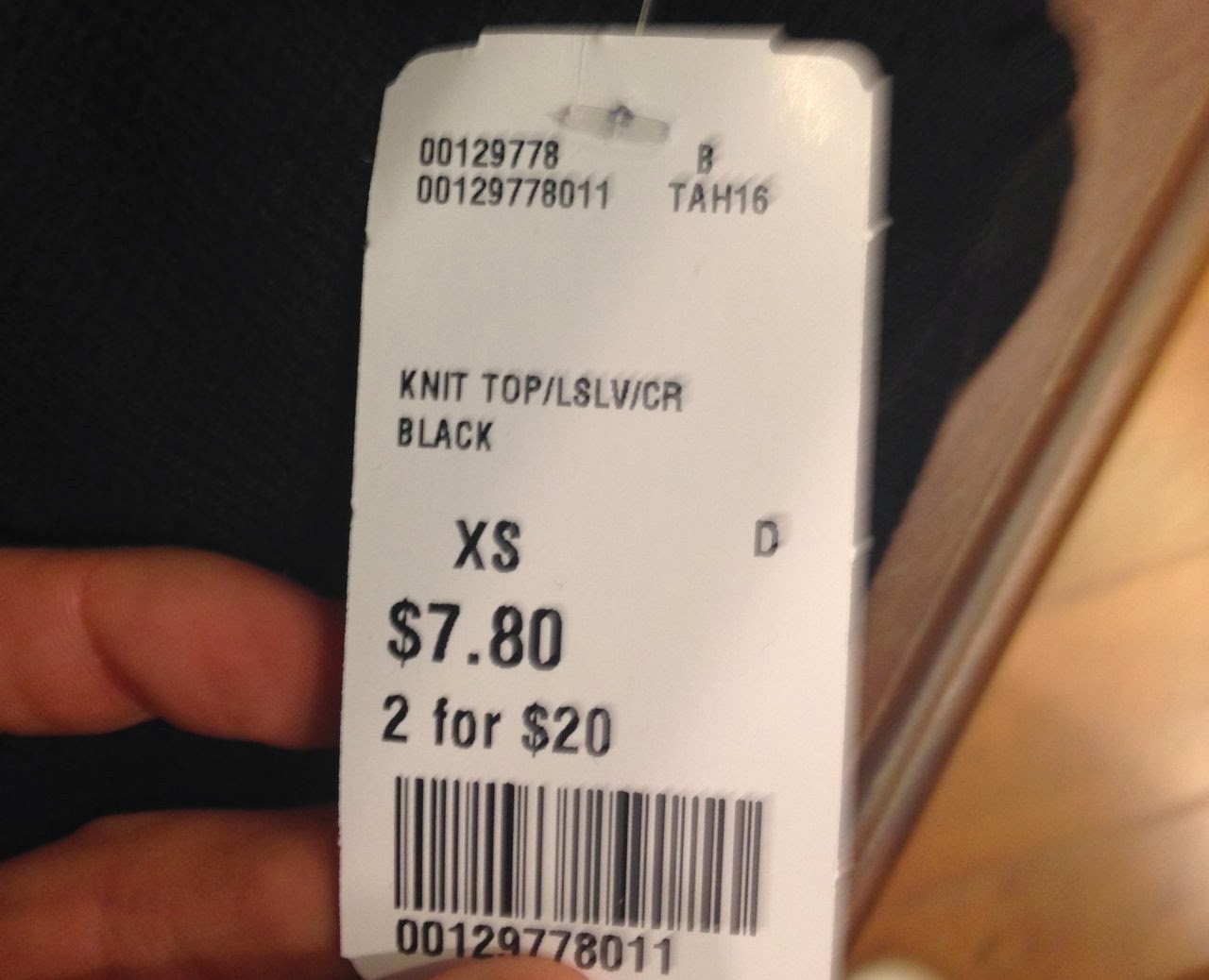 This morning at work the girls were talking about shopping at Forever 21 and I mentioned that I had never purchased anything from there.  They seem shocked.  Every time I've ever gone in one I've left more confused and shaken than before I had entered.

Anyways, Moya offered to take me to Forever 21 on our break and, while I was successful at making a purchase this time, I wasn't any more baffled from the experience.  I asked the girl at the register how it was a good deal to get two for $20 and she laughed and said, "everyone asks me that!".

The total for two ended up being like $16 so I'm inclined to think they would have charged me $20 under the assumption that I was a rube who wouldn't notice.  But $7.80 for a shirt I can wear to work is a deal I can't turn down.
Posted by Detective Oliver Benson at 8:13 PM No comments: 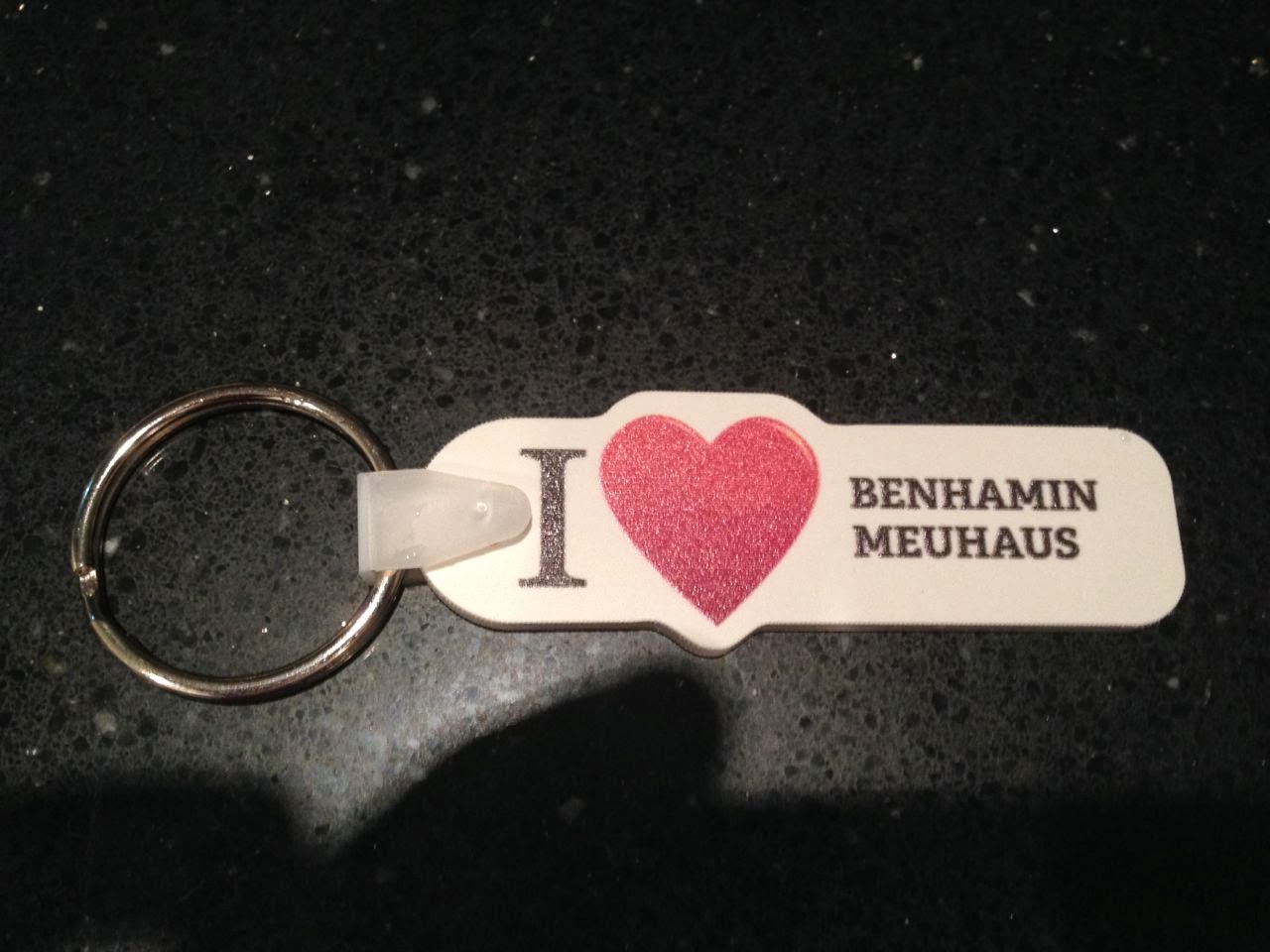 In case you forgot you can refresh your memory here but basically that is how my name was misspelled in a company newsletter congratulating me on a big sale.  It quickly became a favorite of Jonathan's as well as Jenny and Laura.  Jenny would always say my last name like a little kitten, emphasizing the "mew".

Of course when I sent that picture to Jenny she said she wanted one for herself.  Laura said Jon is brilliant.  WHATEVER.

I do like the other side of my keychain though: 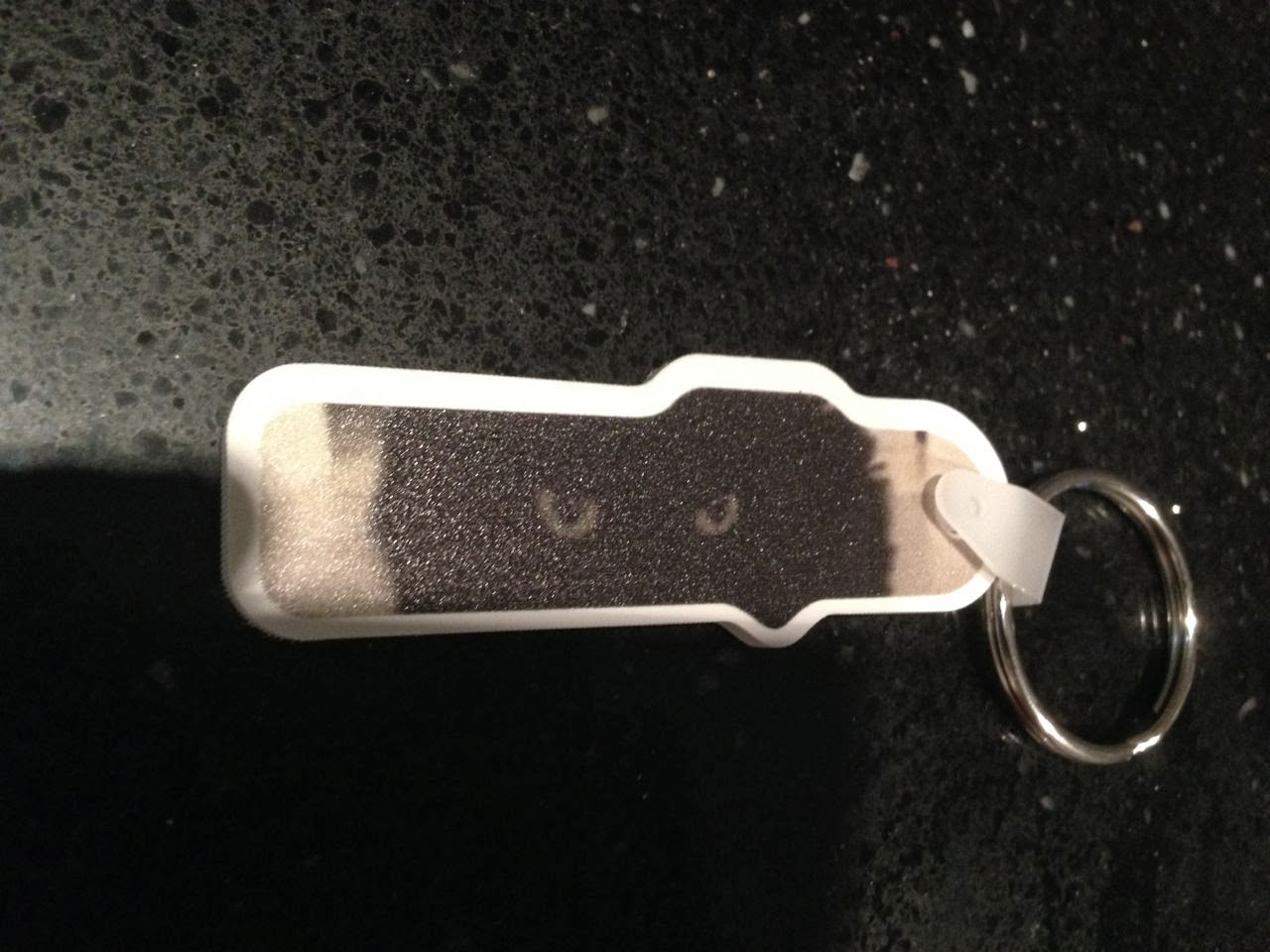 I think that's exactly the face I made when I saw "Benhamin Meuhaus" for the first time.
Posted by Detective Oliver Benson at 7:23 AM No comments: 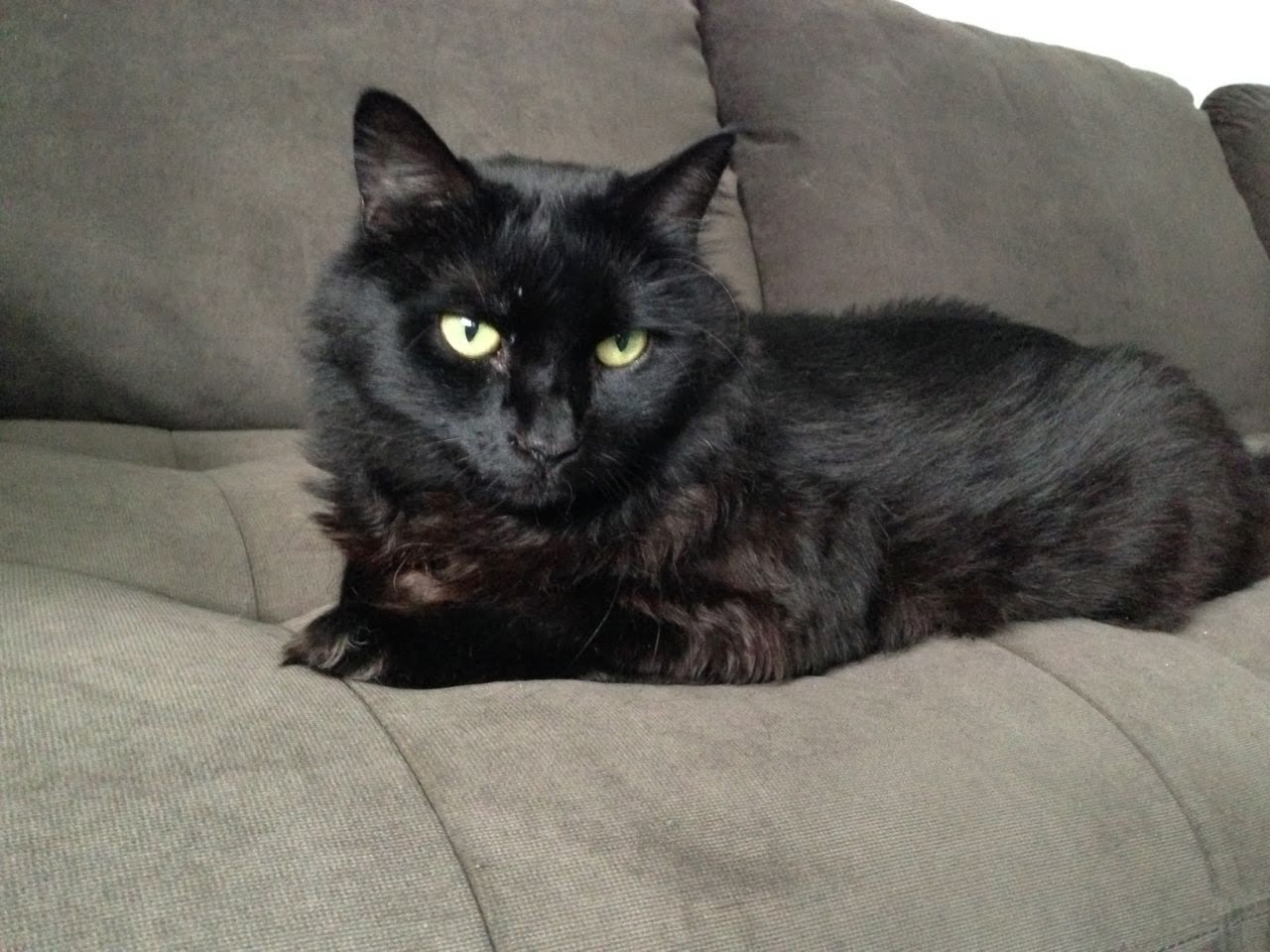 Nothing too important to say, just took some nice pictures of him. 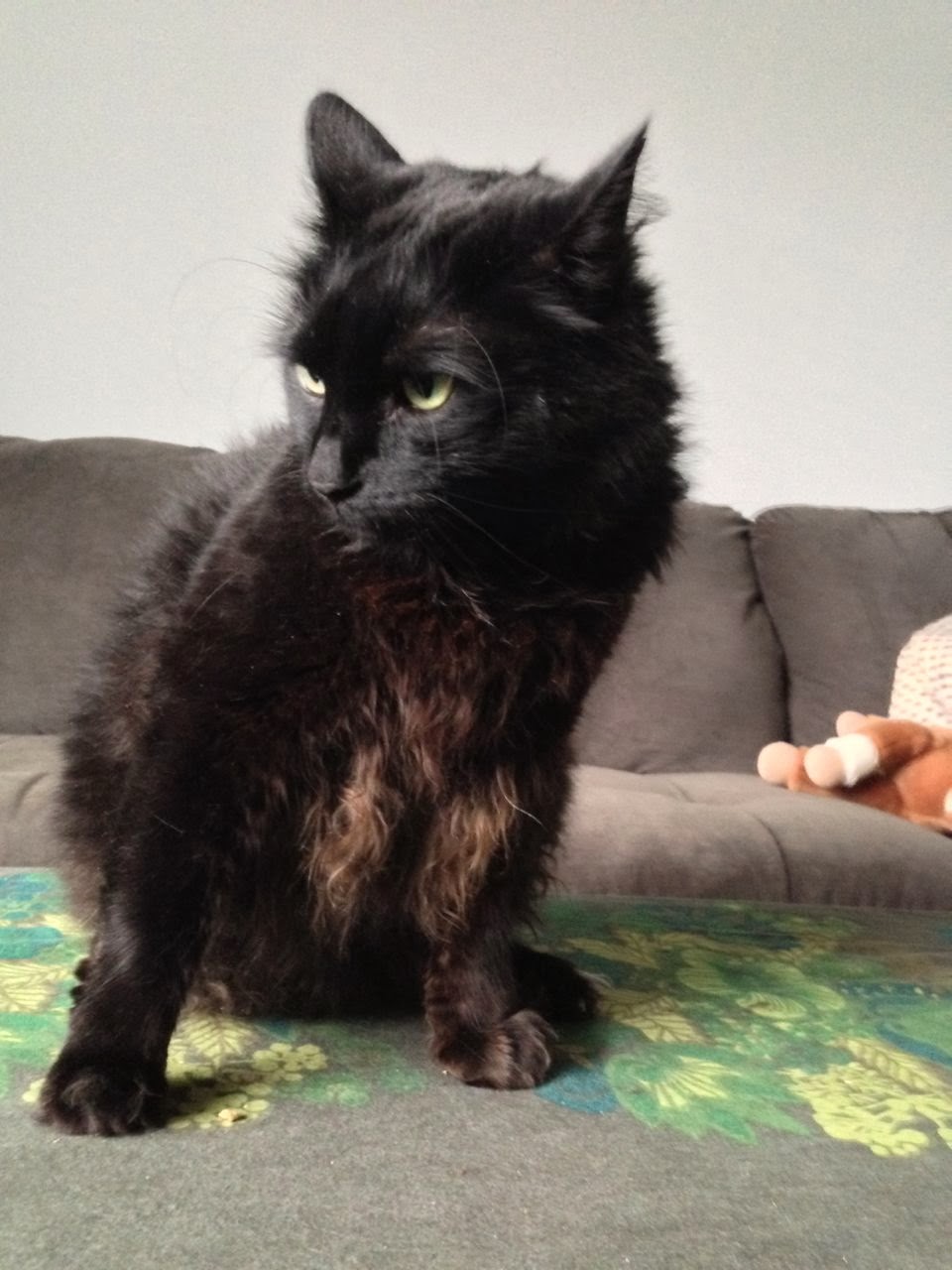 I sent that picture to Gala and she asked if I had just given him a bath.  I can see where she got that idea but no, no, he just inexplicably looks bristly furred and enraged. 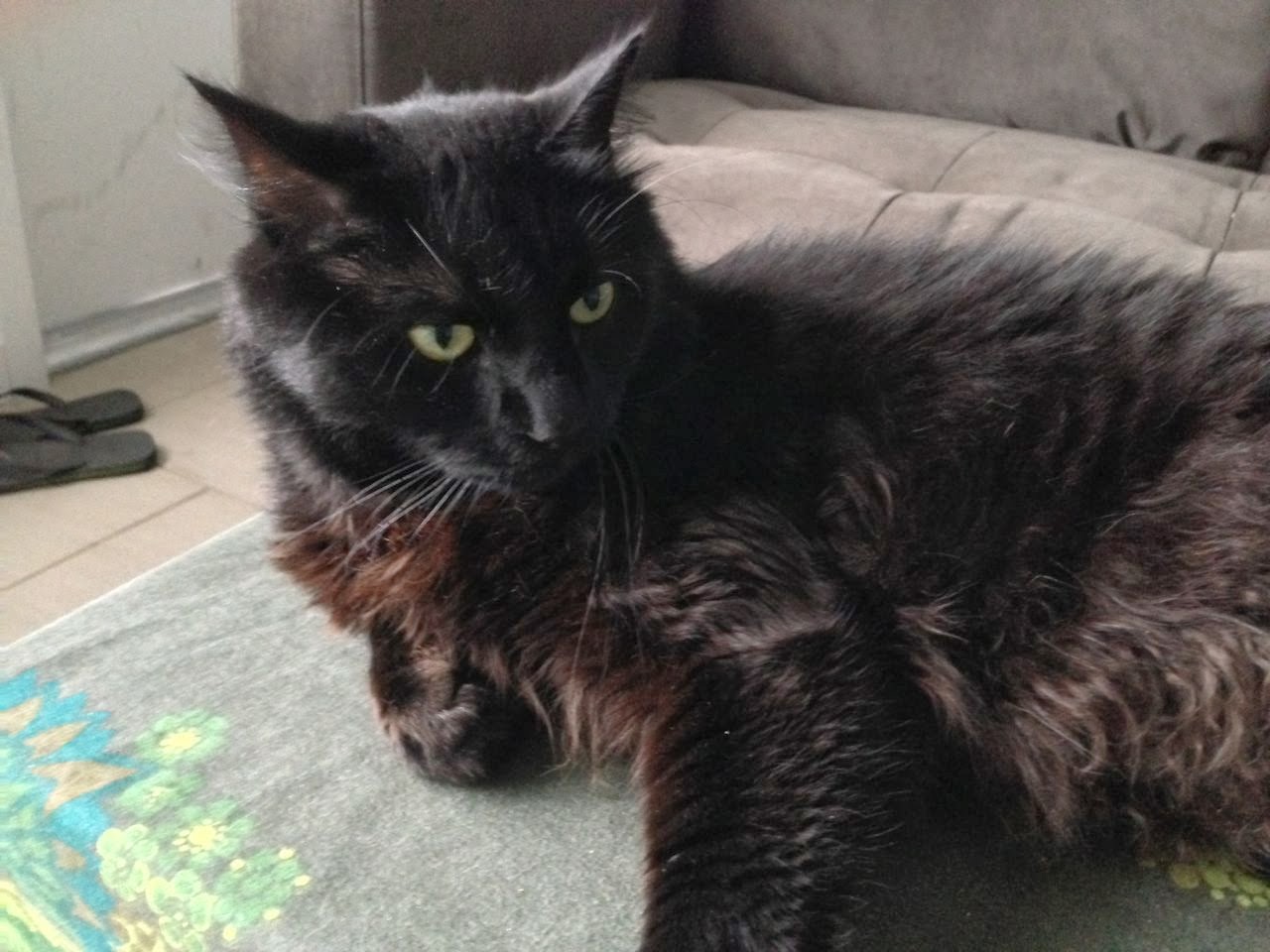 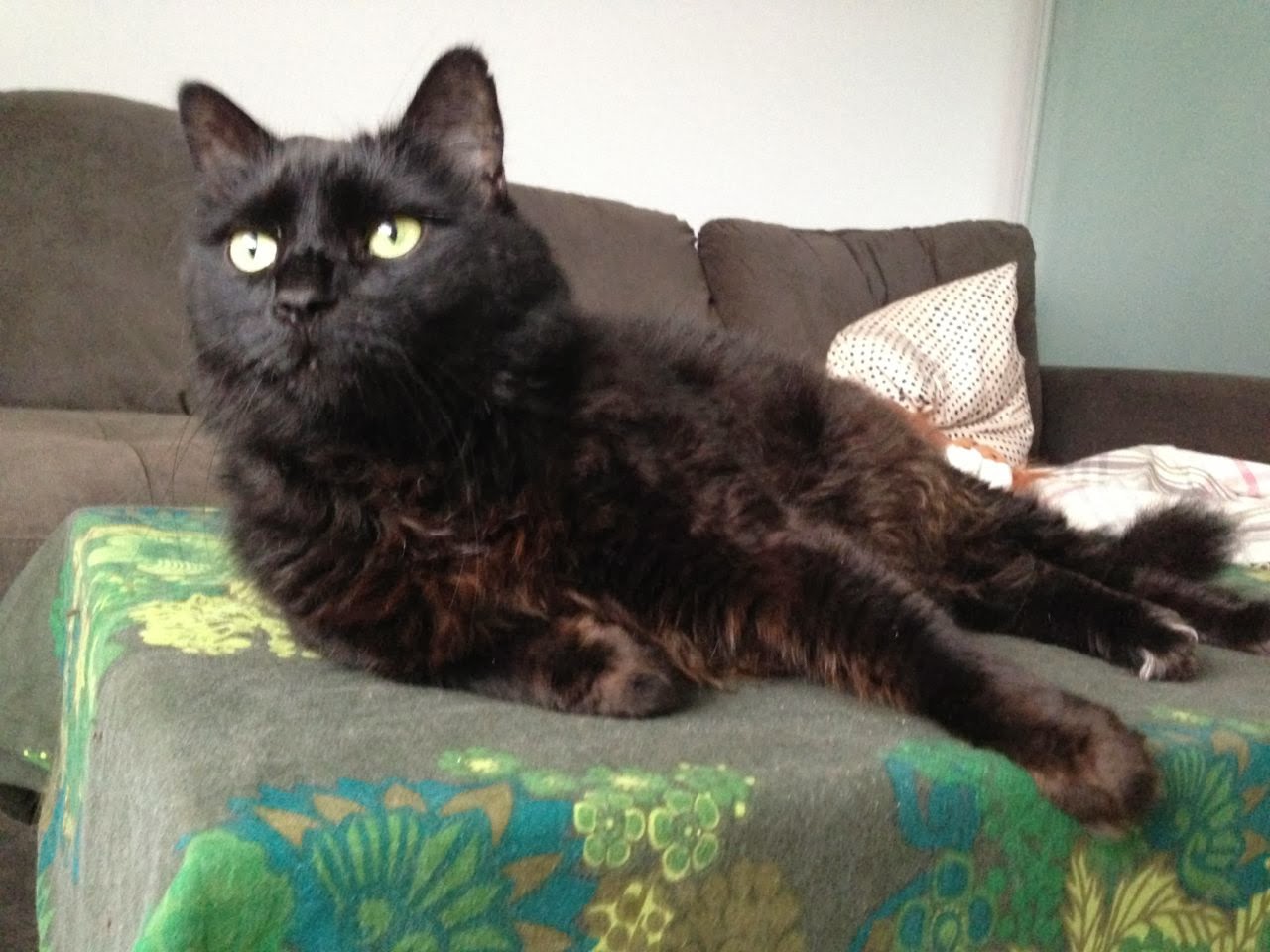 That one was Jon's favorite.  It looks like his senior photo.

Oh and you can see in that picture the weird white hair on his back paws.  Some time in the past couple of months I noticed that he had long white hair growing from between his toes.  It really seems like it happened overnight for it to look how it looks without me having noticed sooner: 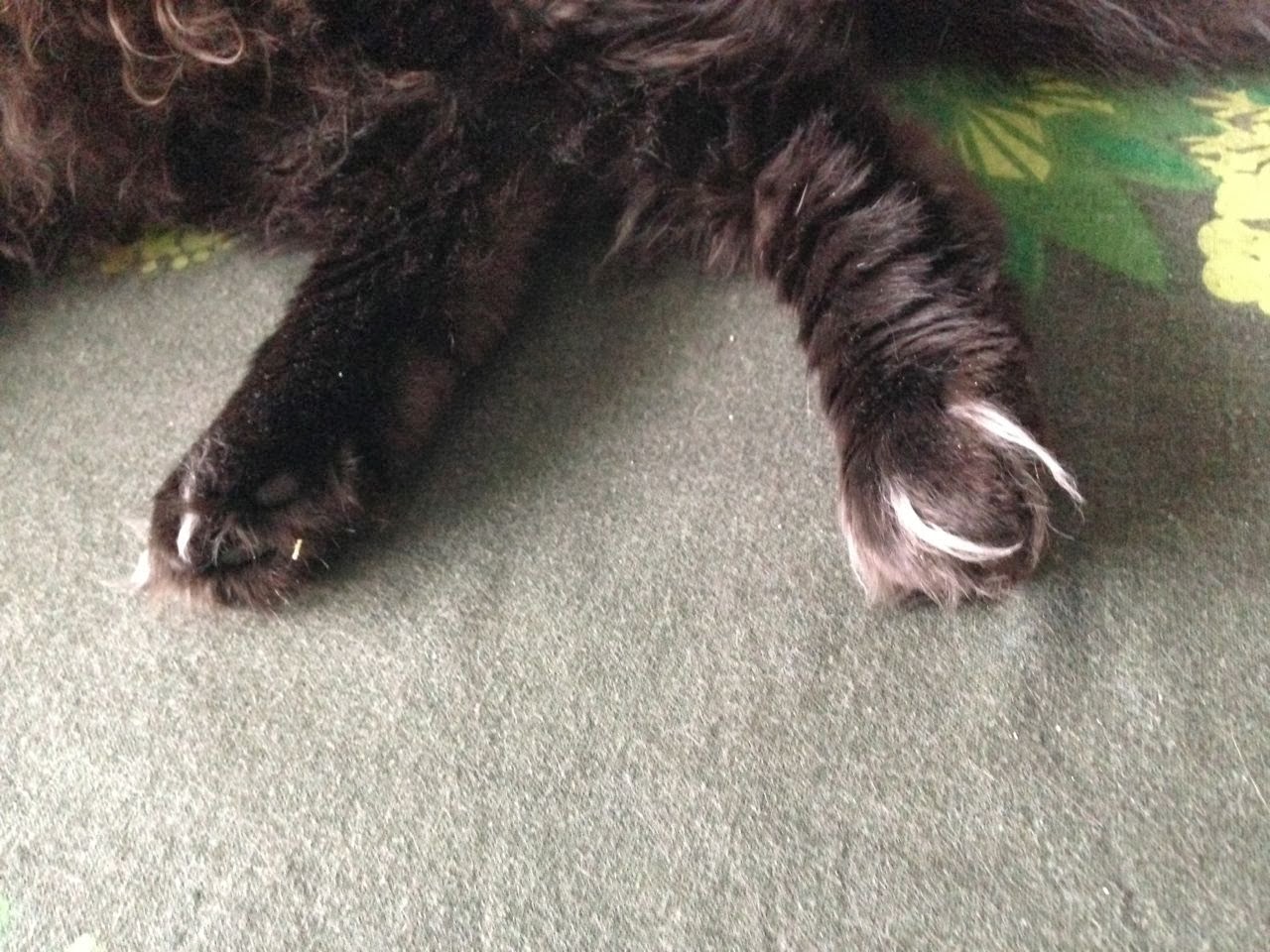 So weird!
Posted by Detective Oliver Benson at 6:40 PM No comments: 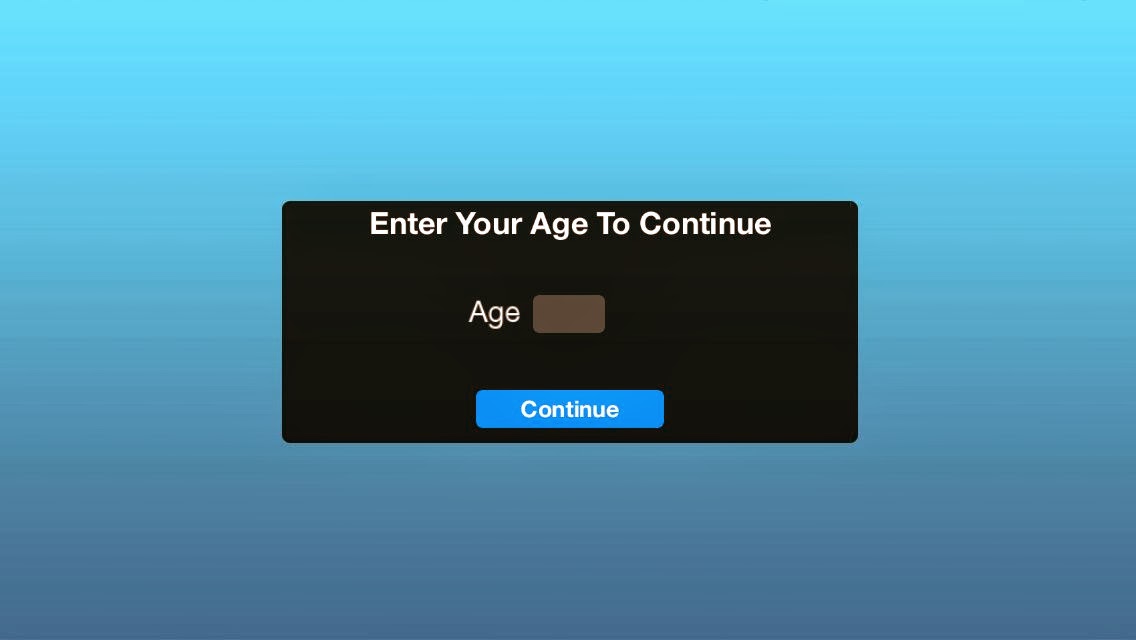 Thank you Simpsons Tap Out game for reminding me that I'm a new age now.

Even though I am bummed that Jonathan and Joe couldn't come down for my birthday I still had a good time on Friday night with Daniel and Chris.  And thanks to the rain all weekend I was able to focus on doing some of those terrible chores I haven't been able to do in a while. 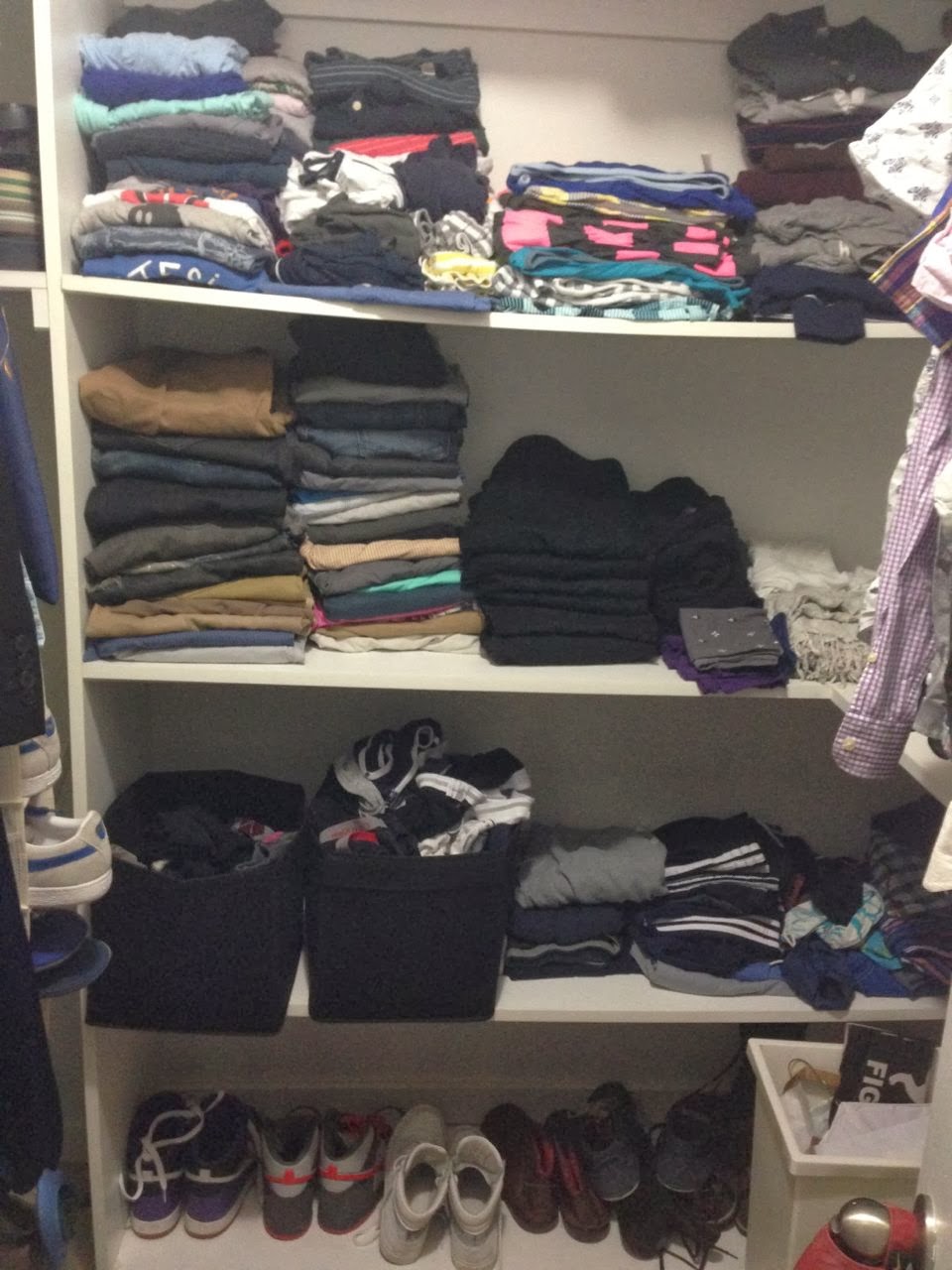 Maybe it's time for a new years purge.  Make room for more black clothes.  My favorite.
Posted by Detective Oliver Benson at 5:36 PM No comments:

thanks for the birthday wishes

Especially Amy for sending me an email full of wonderful gifs of all of my favorite things. 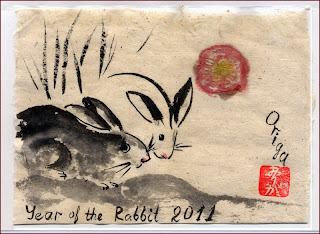 Apparently I really dropped the ball in 2011 by not even realizing it was the year of the rabbit.  What a wasted opportunity.

Sadly the end of the year marks the end of my calendar, so I have to say goodbye to fat cats.  They surprised me with one last farewell picture: 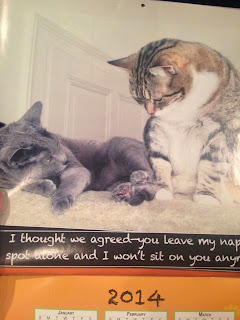 But don't worry, Daniel got me a new calendar for 2014, so you can look forward to a new year of these: 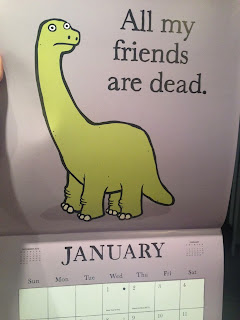 And of course another year of music videos, anecdotes, and hilarious pictures.  Oh 2014, you will be a good year.
Posted by Detective Oliver Benson at 6:30 PM No comments: