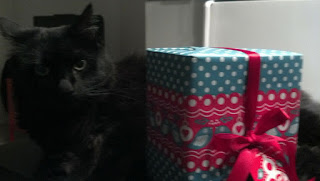 The secret is that he's angry.

I am EXTREMELY excited for secret santa at work, especially since I finally got my gift for my person.  Now that the pressure is off I can relax until it's time to give my gift, but I'm pretty certain it will be well received.  Just like I'm pretty certain the gift I'm going to get is going to be amazing.

I just have a feeling.

Just like I had a feeling I could get a better picture of him with my secret santa gift, but I was definitely off base with that feeling.

First I was trying to do it cold, but I knew he wouldn't show up in the darkness.  And as usual, the flash just made him in to evil santa clause: 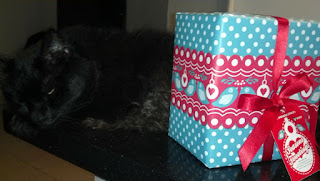 I decided I would be able to get a great shot, I just needed to do some preparation.  Step one was feeding the detective, to hopefully help produce a less cantankerous santa clause.  While he was stuffing his gut I moved on to step two; lighting.

And yet, I really didn't end up with anything worthy of a Christmas card.  I got several nearly identical shots of dead behind the eyes santa: 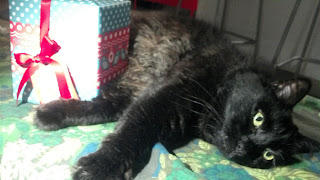 it didn't get long for him to tire of the light, or the present.  I tried in vain to maintain his attention, but when I crossed the line to actually touching him is when he just straight up started biting me and kicking me.

The final pictures were of him glaring at me from behind the present, moments before he ran away altogether: 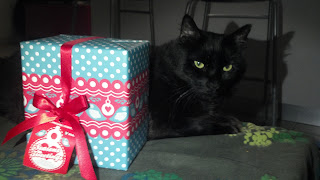