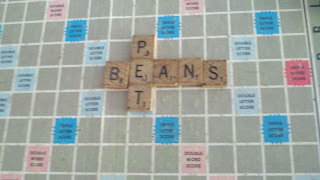 I got a call this morning at 7 from the delivery guys that work at the furniture store telling me that they would be at my apt between 12 and 2.  Was that really necessary?  Apparently.

I couldn't get back to sleep so Jon and I were up all morning doing nothing.  He actually asked if we could play Scrabble which led to these first two words.  I said that was Jon's nickname for his testicles.  He was grossed out.

No sooner had we finished laughing about Jon's pet beans than the couch arrived.  I must say, Scrabble looks a lot better like this: 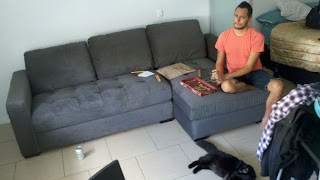 It seems a little obtrusive but I think I'm just getting used to it.  I really like having somewhere to sit and so far kitty hasn't payed any attention to it at all.

We played Scrabble for a little longer, I was able to invent an amazing product.  Picture it, we live in an alternate reality where people become terribly addicted to figs.  Along I come with my brand new product: 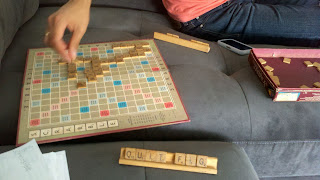 I also came up with Jon's new nickname: 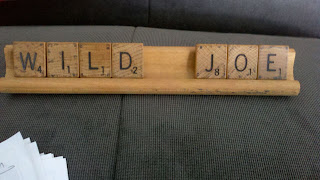 Though the competition was fierce we both felt we needed to take advantage of the day that we still had after the couch had been delivered.

We ended up at Ikea where Jon found a chair that was just his size: 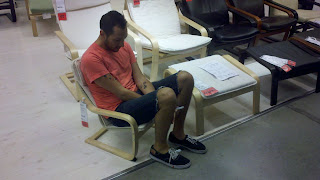 I happened to glance at the piece of paper laying next to him to discover that it was right up his alley. 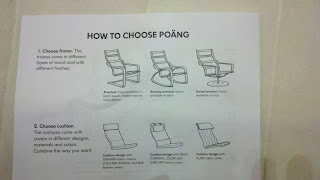 I don't know what that means but it sounds perverted.

At least it's not as overt as this: 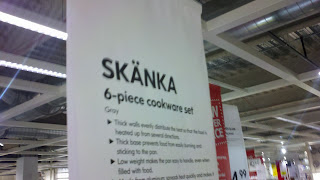 Why would they name a cookware set after Jon?

I don't know, but however you slice it, I had a productive day for getting apt wares.  I ended up finding a $20 coffee table at Ikea that is the perfect size.  Not necessarily for my car but Jon was totally ok with being crushed by a giant box for the entire ride home.

And it was worth it, I feel like I have a real apt now!  And I don't know if I've ever seen Jon this happy: 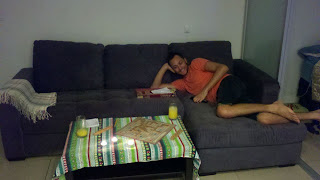 So houseguests, you are welcome to come whenever you want.  I can't wait!
Posted by Detective Oliver Benson at 5:10 PM