are you ready to feel old? 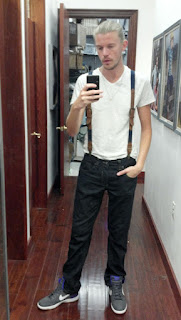 Somehow I got the same schedule as Sergio for the entire week which is both good and bad.  It's good because the surge is the best, even though he did turn in to Eduard yesterday and come at me with the drill gun, but it's bad because it means I have to come up with a different and great new outfit every day.

For some reason the surge is always the most impressed when I show up to work in a particularly good outfit so I've felt a certain obligation to deliver this week.  The past couple days I just wore new shirts that I knew he hadn't seen me in but yesterday was hard.  I waited too long to do laundry and when I finally went to do it before work I discovered too late that I had no laundry detergent.

So not unlike a finely made hash (I watched nothing but Chopped on my flights recently and for some reason it was all about hash) I had to pull together my outfit from scraps of clean clothes that I had in the closet.

Earlier in the morning I had seen this picture on reddit: 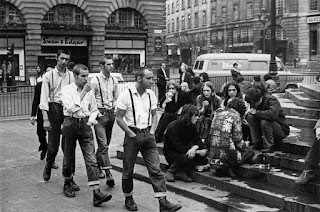 of some skinheads and hippies from the 60's.  I decided to pull out the suspenders and do an updated Aventura mall version of a 60's English skinhead.  Whenever I wear suspenders with jeans I feel like they are giving me a wedgie all day long in a way that I don't feel with other pants.  I guess it's because I'm used to wearing my jeans low.  Seeing the picture of those guys with their pants hiked up like that inspired me to do it though.

I actually do have a pair of Doc Martins but I decided purple Nike hightops were better.  Elliot "fixed" them for me so the tongue sticks out obnoxiously like that.  Sergio says it's the only way I'm allowed to wear them.

But what does all this have to do with making you feel old you ask?  Well, I was going to make a point about how I am a lot like Melissa Joan Hart from the Clarissa years in that I try not to be seen in the same outfit twice.  I figured it wouldn't be hard for me to find a picture of her in a pair of suspenders to help illustrate my point of how similar we are so I headed to the googles.

In my perusing pictures of an adorable little Melissa Joan Hart I eventually got to one of Ferguson.  It's not that I haven't thought about Ferguson since I was a child, there was the weird Clarissa connection at my college, it's just that I hadn't actually looked at a picture of him.  Wow, it was a blast from the past.

Then I considered; I know what Melissa Joan Hart looks like now but I have no idea what Ferguson looks like.  Which brings us to the part of the story where you feel old.

This is Jason Zimbler: 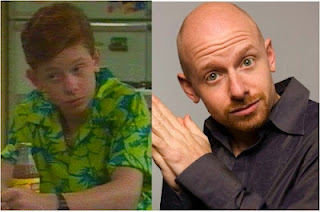 You're welcome.
Posted by Detective Oliver Benson at 8:39 AM